Arts, culture and heritage organisations across the UK have faced enormous challenges during the pandemic, and the Midlands are no exception. As venues closed their doors in March 2020 organisations were forced to quickly adapt their work for online settings.  Audiences have also had to adapt, engaging with their local organisations in new ways, while at the same time having new access to previously distant experiences through online content.

Research suggests levels of arts and cultural engagement before COVID that were consistent with the UK average; and during 2020 this dropped to a similar degree as the rest of the country, with 34% of people across the South reporting attending any arts event since March 2020.

Online engagement was also generally in line with UK average , with 33% watching a performance online and 7% taking part in an event or activity (with the lowest levels of digital engagement found in the South West).

On a positive note, people living in the South were less likely to have experienced local lockdowns than other regions – and those in the South West in particular reported less of negative impact on their income than elsewhere.

The picture around willingness to return to in-person events is mixed across the region; those in the South West and South East are more willing than the UK average, with those in the East being more reluctant.

Again, research into the pandemic’s impact on the population by Audience Spectrum segment paints a mixed picture.  Generally speaking, low-engaged segments have seen their engagement drop further over 2020, while the higher-engaged segments have remained engaged, either in-person or online. The exception here are Commuterland Culturebuffs, who make up around 21% of the population in the South (as high as 30% in the SE), but have seen a notable drop in engagement over the past year, a trend which could have a significant impact if it continues in the long term.

For organisations working in the South, the Audience Agency’s Cultural Participation Monitor (a nationwide ongoing survey of changing views about participating in creative and cultural activities through the pandemic) can be explored at a regional level South | Cultural Participation Monitor | The Audience Agency. The data is also further broken down to detail for the East, South East and South West. 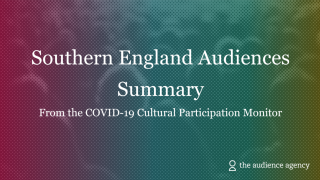 This report summarises results for Southern England from the first wave of The Audience Agency’s COVID-19 Monitor.