A mixed age-range group, some with children at home, but a relatively high proportion of singles, living in premium city centre locations in areas of prosperity and growth.

Metroculturals are the best prospects for arts and museum attendance and participation, though competition for their attention is fierce. They are confident in their own knowledge and tastes and expect their needs to be addressed accordingly. Although many enjoy classical works, as a group, Metroculturals represent the best prospects for new work and cultural innovation. Their recommendations may influence less confident and pioneering audiences.

Engagement – they are three times more likely than average to engage as attenders and participants. This holds true across many artforms, from street arts and museums to digital art. For example in the last 12 months:

Although more are arts attenders, they are also the most likely segment to attend a museum at twice the

average with 80% visiting at least once a year. They are very frequent attenders, many with a weekly habit, and are most likely to attend numerous venues. By far the best prospect for digital art – online and in situ – their confidence in both technology and the arts means Metroculturals are currently the dominant audience for this work at 17%. Knowledgeable members of culturally aware and active networks, they bring a high degree of confidence in their own opinions and tastes when it comes to culture. This in part explains why they are the segment most likely to favour new work, contemporary forms and independent film. Many in this segment tend towards one or two preferred artforms. 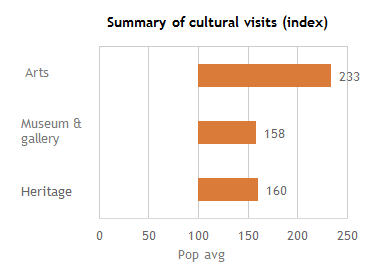 While their love of arts and museums is clear, Metroculturals are also out and about, taking part in a wide variety of activities from fitness and sport to debates and eating out. They have the highest propensity to visit heritage sites and are avid travellers, taking frequent foreign trips to a wide variety of destinations.
Metroculturals are by far the most internet dependent of all the segments, and use web and mobile extensively for leisure purposes. 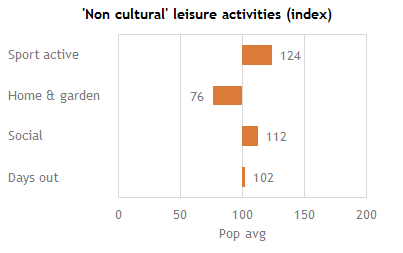 Metroculturals live in premium city centre locations in areas of prosperity and growth.

Visit our Audience Mapping tool in the Audience Finder dashboard to investigate the location of this segment. 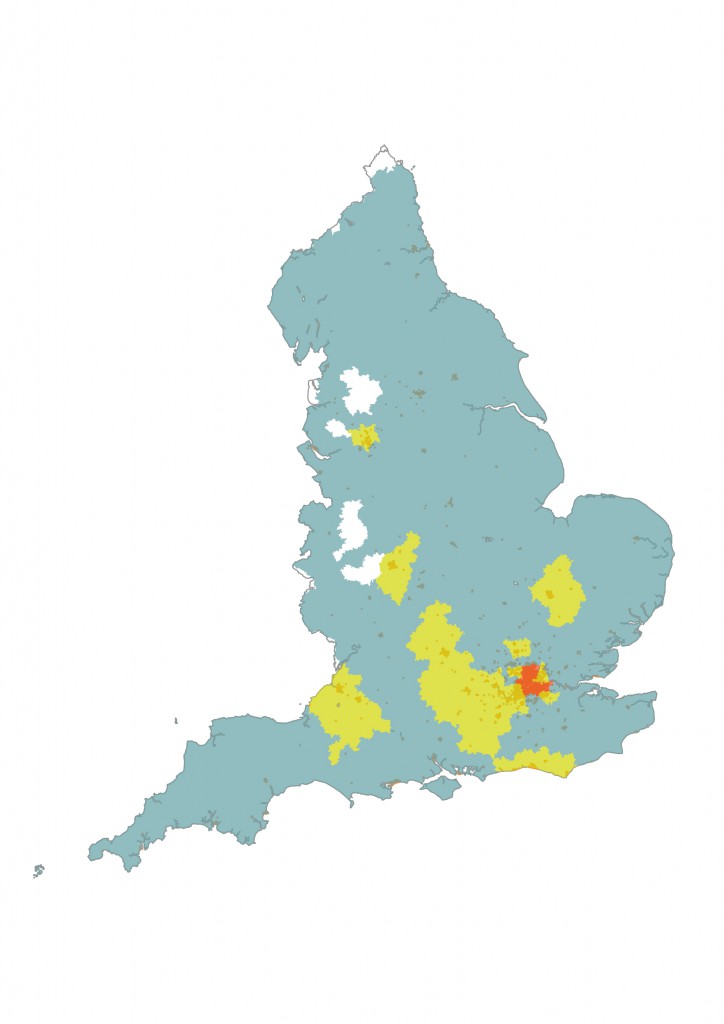 Metroculturals are highly engaged in creative participation, ranking highest for amateur dramatics, singing in choirs and playing a musical instrument.

Not surprisingly over 50% consider themselves to be arty, far more than other segment.

Over a fifth have bought works of art for themselves.

Over a fifth have bought works of art for themselves

While Metroculturals are notable for their prosperity and city-centre living, their most defining demographic feature is level of education. Over 70% have a degree level education and a significant proportion have further post-graduate or professional qualifications.

They play hard, but they work even harder, in high-status roles in key financial and professional organisations, as well as in politics, media and the arts.

From primary research it can be noted that a significant proportion of Metroculturals are arts and museums professionals.

Metroculturals are the earliest adopters of digital and other technologies. Constantly connected via their smartphones, work-life takes precedence for many. They spend many hours online and couldn’t manage their lives without the internet. Frequent shopping online allows them to purchase goods efficiently, and price is less important than time.

Over a third watch on demand TV and use streaming – far and away the segment most given to doing so – reflecting confidence in their own, rather than curated, tastes. 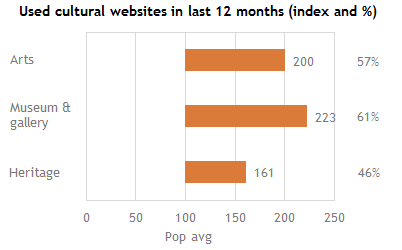 Metroculturals tend to be resistant to overt advertising messages and like to be supplied with enough information and choices to make up their own minds. They are however susceptible to well-targeted, niche and interactive direct e-communications. They enjoy being seen to be well-informed and like to recommend and share their experiences with others: they are useful influencers.

They are particularly unmoved by television adverts and face-to-face communications, while local newspapers make almost no impact at all.

They are heavy media-users in particular broadsheet readers, though they prefer to access their news and commentary online: 21% read The Guardian, 16% The Times and 10% The Financial Times – the only segment to do so at all.

Culture is more than entertainment for this segment, for many it forms an important part of their identity, challenging and stimulating them intellectually and influencing the way they see the world.

80% believe that museums help them to understand their world

Over 50% consider themselves to be a creative person

As active people, Metroculturals are also more likely than average to volunteer, nearly a third doing so across a wide range of activities.

With 14% donating to the arts, Metroculturals are the most supportive of the arts, nearly one fifth of givers making donations over £100 (second only to Commuterland Culturebuffs in their level of gift). Donations to museums are above average at 18%, with 10% of these giving more than £100; putting them at the top of the museum-giving league. Their propensity to give to heritage though is much more in line with the population average. Notably they are the main source of major donors to the arts, with 3% giving over £1,000 annually. 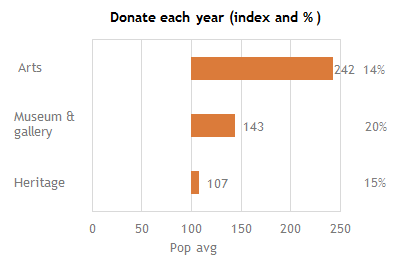 Metroculturals are largely to be found in cities like Manchester, Newcastle, Birmingham and Bristol, although the overwhelming majority are in London.

This segment is made up of many different age-groups, on average just slightly younger than the population average. Only a fifth have children at home, while nearly 50% are single.

There is a good deal of demographic diversity in this segment, especially in terms of age, family circumstance and cultural background. What they have in common is a culturally active, metropolitan lifestyle, high levels of education and high-status jobs.

Metroculturals are truly cosmopolitan, the group least likely to identify as “White English” with only 50% doing so. The segment includes above average numbers of people of all other cultural backgrounds and ethnicities; the highest number of foreign nationals and people of mixed-race and mixed cultural heritage.

Metroculturals are highly active socially and passionate about arts and culture. They are confident and knowledgeable in their preferences, diverse in age and background but united by their high-levels of education, well-paid jobs, liberal outlook and active lifestyles.

Personalised communications through digital media are the best way to compete for the time and attention of this segment who are open to a wide ranging cultural offer.

The most open-minded of all segments, Metroculturals are the best prospects for any kind of experimental work. With wide and informed tastes they are obvious targets for more obscure or niche cultural offerings. However, as people with highly developed critical faculties they can be demanding.

It is important to acknowledge their very wide ranging tastes, from early music to digital art. They appreciate that their refined interests are known and that these are recognised and inform communications directly to them.

Those in the group that are avid cultural consumers are likely to wield a good deal of influence on their peer networks. Their engagement with, and good opinion of, an event or exhibition in its early stages could be crucial to its long-term success in terms of audience engagement. They are the small group of “innovators” in the cultural market place that help to drive the tastes of early adopters and the early majority. 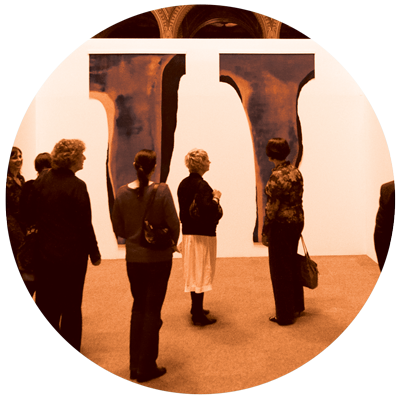 Metroculturals are the best prospects for cultural festivals and other curated partnerships which create intensive or immersive cultural experiences and debate.

Arresting creative partnerships between artists of contrasting styles and backgrounds are also likely to have good traction with this group. This can be a great way for emerging artists and practitioners to grab the attention of this critical group.

Environment is important to all audiences and participants, but it may be the least important to Metroculturals amongst all the segments. For them, the art is the thing, indoors, outdoors, all weather – they will follow their interests. Nevertheless, this group have large amounts of disposable income and propensity to give resources to the cultural sector, e.g. they respond very well to appeals to spend money in the non-profit, high-quality cafes and shops of cultural institutions.

Their proximity to a rich variety of venues helps feed this segment’s cultural habit. Ease of access may form part of the decision-making process for people spoilt for choice and short of time. Metroculturals have one of the lowest levels of car ownership and mileage of any segment – public transport connections, taxi ranks and bike racks matter more.

Time is more important than money for busy, always-on Metroculturals. They are more likely to pay premium prices for a must-see experience than for a good seat. Priority booking for in-demand events is probably a more important membership benefit than discounting. It may well be that flexibility and convenience – late booking, ticket exchange, mobile ticketing – may be valued and also worth a premium.

Time is more important than money for busy metroculturals 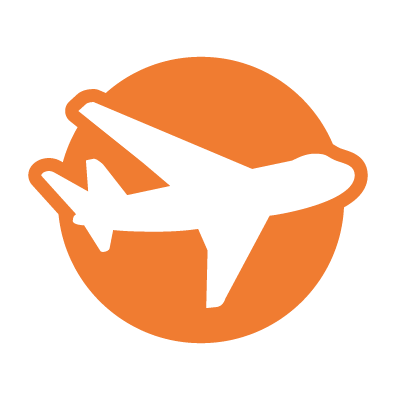