International Agent | 007.1 From Europe with Love

One of the factors that The Audience Agency needs to assess as part of its brief to evaluate Galway 2020 European Capital of Culture is ‘Europeanness’. That is, how far does G2020 have an effect on the way that participants and audiences think about Europe?

Methodologically it is not one of the easiest things to do. What is it we are actually measuring and how sure can we be that we are doing this correctly? Thankfully, some have already addressed this issue.

According to dictionary definitions, Europeanness is ‘The quality or fact of being European, or having or sharing a European heritage’ which then implies a number of other questions, as we need to look at what we mean by European or European Heritage - not just tricky concepts but contentious and political too. There are also related concepts such as European values, identity and citizenship - and are we talking about Europe as a geographically defined zone or the European Union as a political one?

There have been some interesting academic papers written on the subject recently, but one of the best and most recent is ‘Acting European: Identity, Belonging and the EU of Tomorrow’ by Mafalda Dâmaso, Luke John Davies, Kuba Jablonowski and Seamus Montgomery (June 2019, FEPs network) whose study is available online.

They point out that concepts have recently been dominated by a very particular sense of belonging based on borders and also on problematic ideas of ‘European civilisation’. They oppose these ideas with ones that are:

"… driven not by geography, institutional belonging or legal citizenship but by values, ideals and ideas which are collated here under the banner of ‘Europeanness’."

It’s an interesting study which branches beyond the theme of this particular section of the International Agent, but it’s worth a read for its positive vision. Incidentally, one of its authors, Mafalda Dâmaso, will be speaking at the Adeste + Rijeka Summer School in September.

Looking specifically at the ways in which people are researching this topic with the public, we should once again turn to the Eurobarometer and its published study in June 2019 on European Citizenship by the EU and Kantar Belgium. The full report is available free to download. This looks at the interesting subject of citizenship.

Perhaps surprisingly, given recent events, overall perceptions in Europe of Europe and the EU have become more positive over the last few years:

"Trust in the EU is at its highest level since 2014 and remains higher than trust in national governments or parliaments."

As always, some of the data demands closer attention. For example, one of the questions asked is about how attached people feel to town/city, country or Europe. Looking particularly at attachment to the EU or Europe, in 23 of the states, more than half of people felt attached to the EU. Luxembourg has the highest proportion with 80% feeling attached or very attached.

In four states, though, less than half of respondents feel attached to the EU. One of those is the UK, which has an interesting percentage of 48% feeling attached or very attached to the EU. It’s not the lowest though: Croatia, Greece and the Czech Republic all have a lower attachment than the UK.

When asked about attachment to Europe (rather than the EU), the proportion is higher overall and reaches 59% in the UK with 6 states below. Once again Luxembourg comes out top with 86%. There are some interesting results in there too. For example, there is a big contrast in Sweden between attachment to the EU which is 50% and attachment to Europe which is 80% showing how distinctive those concepts can be.

Incidentally, there is the sort of demographic factors that we might expect. People in the higher social class groups and younger age categories are more likely to feel attached to Europe and the European Union than lower and older categories.

Another notable area of the report is that which deals more directly with citizenship. Here the questions asked are:

For each of the following statements, please tell me to what extent it corresponds or not to your own opinion.

Overall, this has steadily increased year on year from 62% feeling ‘Yes Definitely’ or ‘Yes To Some Extent’ in Spring 2010 to 71% in Spring 2019. It is a majority in all EU states but ranges from 52% in Bulgaria to 93% in Luxembourg. The UK is 5th lowest at 58% with the Czech Republic, Greece, Italy and Bulgaria below. 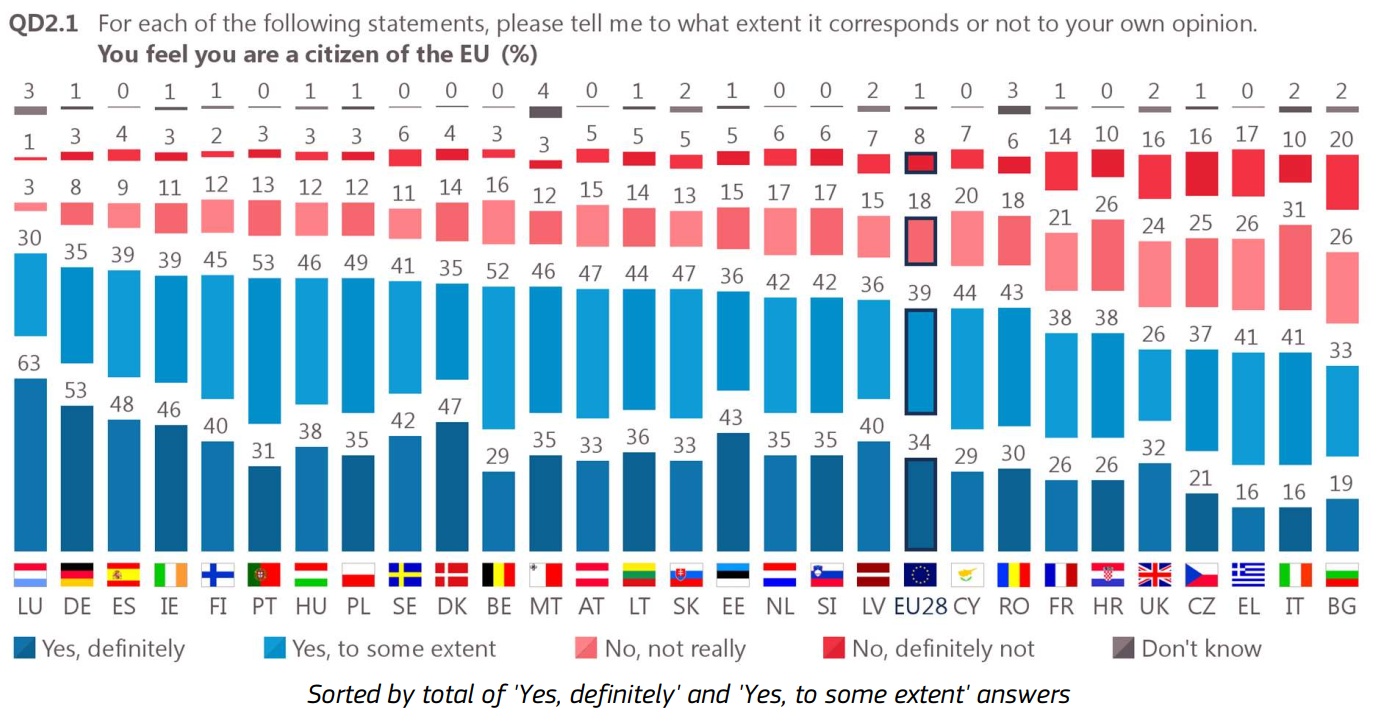 So, especially interesting to us in relation to the question of Europeanness is which elements have the biggest influence. The precise question is:

In your opinion, among the following subjects, which are those that most create a feeling of community among Europeans?

Excitingly, out of the options given, the highest is ‘Culture’ with 28% of respondents giving this, above History, Rule of Law, Economy, Religion and other possible factors. 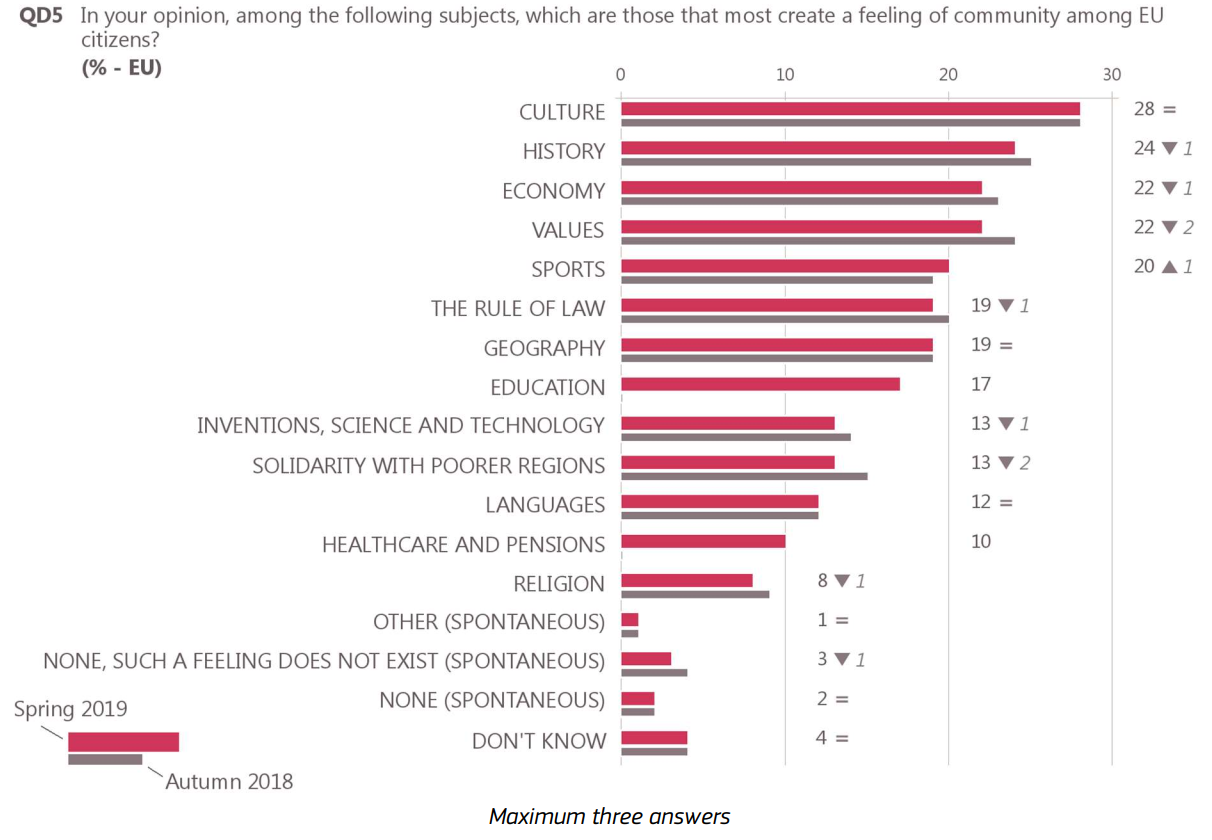 This has all sort of ramifications which we could think upon, but returning to the matter in hand, it demonstrates why this is an important aspect to measure within the European Capitals of Culture. It is a difficult thing to consider but does indicate an impact which we should consider exploring.

The way in which we have decided to evaluate this question in Galway 2020 is being trialled through the year, with the parallel ECOC in Rijeka also looking at the issue. Towards the end of the project and post-2020, we will be publishing our results and methodology, which should be useful for future evaluation of European Capitals of Culture and similar initiatives.

The Learning Diaries | Getting the most out of our Evidence Hub

The Learning Diaries | Reimagining your engagement practice - principles for festivals

We talk to Bradley Hemmings about the Greenwich Dockland International Festival's reimagining of their participation and engagement programme through the pandemic.