Feature | The Value of Insight on Tour

Some touring companies feel they are kept at arm’s length from the people who pay to see them perform – only forming brief relationships before moving on to the next town, and not knowing if they will ever see them again. Venues, on the other hand, have access to resources to help form a long-term relationship with their audiences.

The truth of the matter is that neither venue nor company can exist without the other, and at the heart of this symbiotic relationship is the oft-unspoken tension that both partners believe the people sat in the stalls to be ‘theirs’. Of course, this isn’t the case. Neither should claim individual ownership of the audience, but there needs to be greater shared understanding of audiences across all parties.

In the past 12 months alone, there have been huge advances in data sharing and insight mining for the touring sector.

Last year The Audience Agency released Show Stats, an audience insight and data tool for the touring sector powered by the data in Audience Finder. For the first time, both touring companies and venues can access a tool that can be used for audience evaluation and planning.

Most importantly, Show Stats provides the information that has not been easily accessible to touring companies previously, giving comparable insights about the profiles and behaviours of audiences.

Gurpreet Braich, Communications Manager of Rifco, says: “As a touring company we don’t have a box office and rely on venues to provide this information. Show Stats makes accessing key audience information simple by having it all in one place. The information helps with reporting, future planning and advocacy.”

Being able to talk about audiences in the same terms is advantageous to all, affecting what visiting companies and venues both do. Show Stats can indicate whether an audience is likely to pay more, and predict booking time. This information can help venue and company set relevant ticket prices, discounts and plan their campaign activity. It can predict some audience characteristics for a touring show, offering reassurance and suggesting promotional tactics.

Sarah Setter, General Manager of Ballet Boyz, says: “Show Stats is a really useful tool for us to have in our tour booking arsenal. It means that when we are talking to new venues we know a little more about our audiences. We now know that a lot of our audience members are new to dance and this insight from Show Stats means we can demonstrate how we can help grow dance audiences in new areas.”

In other words, Show Stats gives touring companies a sense of the different kinds of audience they are able to attract at the different tour locations, enabling them to predict sales trends, and go where they can make the biggest impact. This all helps them to make a persuasive case to tour destination and co-producers.

Lucy White, Marketing Manager (Touring) at Sadler’s Wells, says: “The reports I have pulled for the 2016 Breakin’ Convention tour have been really useful. Not only for Arts Council England reporting, but also to have something evidential rather than anecdotal to give to the marketing teams during our recent venue visits. I think it helped to show that hip hop audiences are not unreachable. I’ll definitely be using it again after this year’s tour.”

Being able to see the differences between audiences for individual productions can also give clear rationale for marketing plans. Richard Surgay, Sales and Customer Services Manager at Nottingham Playhouse, says: “We adopted Show Stats to fully inform the marketing campaign for our pantomime, Aladdin. Using the Audience Spectrum segments profiling of our audience from our 2015 pantomime, Dick Whittington, we have set first-time attender targets for Aladdin for each segment. We’re using Show Stats alongside Audience Finder to shape our marketing tactics for those first timer targets.”

For the first time, touring organisations can create a clear picture of their audiences to make a better case for funding or support and partnership work. Through framing and building a picture of what collective audiences look like, as well as placing that picture within a population, regional or a cultural engagement context, touring companies can start to build a compelling story based on the particular kind of value they bring.

This can help to create a more robust case for developing strategic partnerships between a venue and a company on a longer-term basis.

We’re only just beginning to scratch the surface of what could be possible. By applying this new level of audience insight in collaborative, targeted and strategic ways – as well as shaping the tactical marketing and communications approach to match – we should be able to work together more effectively than ever before to grow our collective audiences.

Find out more about Show Stats

Find out more about Show Stats in our Knowledge Base 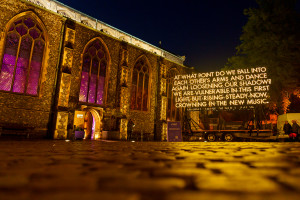 Unpredictable and changing circumstances are making it difficult to plan any festival this summer but we are a resourceful lot in the cultural sector.