The capital's arts and culture offering before the COVID-19 pandemic acted as a key driver for the UK's creative economy, consisting of some of the most high-profile performing arts venues, museums, galleries, orchestras and dance companies in the world, showcasing work to millions each year engaging Greater London's diverse population and to cultural tourists from across the globe.

As organisations were forced to close in March 2020, many organisations who were able, moved online using streaming and digital work to communicate with audiences, diversifying their brands in new ways. However, despite notable successes in a digital capacity, organisations of all sizes faced, and many continue to do so, enormous challenges to their long term resilience and business models. For those that tour internationally, the effects of the end of the Brexit transition period in January 2020 has made touring, for at least the near future, more complex and expensive, further adds doubt to what, for many, a crucial part of their business models.

The pandemic hit hardest in Greater London early in the first lockdown before receding quicker than many parts of the UK in April and May 2020. While later in the year, the sudden installation of a tier 4 lockdown in the days before Christmas Day ended any outdoor cultural activity taking place until the Spring. Allowing the reopening of museums, galleries and outdoor activities, with the limited reopening of indoor venues at part capacity. A majority hadn't heard a physical performance or event in over 14 months. However, social distancing means for a majority of performing arts venues, including the West End, that despite innovative planning and programming, reopening to limited audiences is not a model that can be continued over the longer term without further government intervention.

Before the pandemic, London had higher levels of arts, and cultural engagement than the UK average and levels dropped less in London since then overall, while at the beginning of November, COVID appears to have had a more significant impact in terms of time and money available. More positively, more Londoners are ready to start attending in person than the UK average, demonstrating a demand that will encourage arts organisations in the coming months that the population wants to reengage in person and drive the cultural economy once again. Key highlights of our research include: 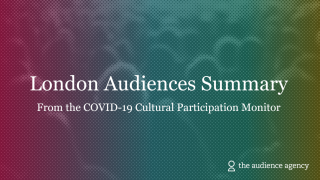 This report summarises results for London from the first wave of The Audience Agency’s COVID-19 Monitor.